From partnering with William Orbit on Ray of Light to structuring 2005’s Confessions on a Dance Floor as a seamless DJ set, Madonna consistently brings dance music into her evolving sound. Still, even among all those great beats and burrowing hooks, 1990’s “Vogue” remains an unusually resilient model.

Culled not from True Blue or Like a Virgin but rather, I’m Breathless, the soundtrack album for film vehicle, Dick Tracy, “Vogue” has a legacy far deeper than its radio ubiquity. Currently, the cultural resonance of “Vogue” shines brightly on the FX series Pose. The song is a pivotal plot point, highlighting the moment at which the house-ballroom community begins to conquer the mainstream.

Named for the angular dance form (in which participants strike a pose, as if for the camera) "Vogue" achieved massive commercial success on a global scale, hitting number one in the US and UK, as well as topping charts in Canada, Japan, and beyond. During an era when physical singles were still viable products, “Vogue” was 1990’s highest earner—moving upwards of six million copies.

At the heart of the classic is its use of the Roland TR-909. After an airy introductory synth pad vacillating between the song’s core chord changes, the 909 makes a subtle entrance. The crisp attack of the drum machine defines the track, its snare rolls evoking the heady world of New York City and its fashionistas.

After an airy introductory synth pad, the 909 makes a subtle entrance. The crisp attack of the drum machine defines the track, those snare rolls evoking the heady world of New York City and its fashionistas.

Produced on a scant $5,000-dollar budget by remix-master Shep Pettibone, the song began life as an intended B-side. Pettibone (known for his work with Pet Shop Boys, New Order, and George Michael) created a roomy, atmospheric track with a distinct Salsoul Records influence. He then sent it to the jet-setting singer who wrote her lyrics over Pettibone's 116 BPM-groove.

Pettibone’s innovative approach to remixing–replacing instrumentation and recontextualizing songs in fresh melodic constructs—made him a sought-after collaborator. His takes on Madonna tracks like “Express Yourself” and “Like A Prayer” became the definitive versions.

Madonna and Pettibone continued to collaborate and achieve success together—notably on the Erotica album. Soon, however, Pettibone would leave music production behind for entrepreneurship. He now runs The Empress Hotel and Paradise Night Club, both in Asbury Park, New Jersey. Speaking to Billboard in 2015 about the song’s longevity, Pettibone remarked, "It's always on a radio somewhere, or being played somewhere, you know, in a club. It's still a dance floor filler after all these years too, which is amazing.”

Current Madonna keyboardist Ric'key Pageot agrees. "It has been in the set list in every world tour I've done with her since 2008," Pageot says, speaking from rehearsals for Madonna's Madame X tour. "When that song drops, the crowd always goes nuts."

Pageot notes the way the song builds. "The production was ahead of its time. Each drum sound is introduced layer by layer, starting with the snaps, then the high toms building anticipation. Once that iconic beat drops with that classic TR-909 kick, snare, and hi-hat, it just pounds your chest." Playing "Vogue" live remains a nightly thrill. "It's still surreal for me when I perform it with her." 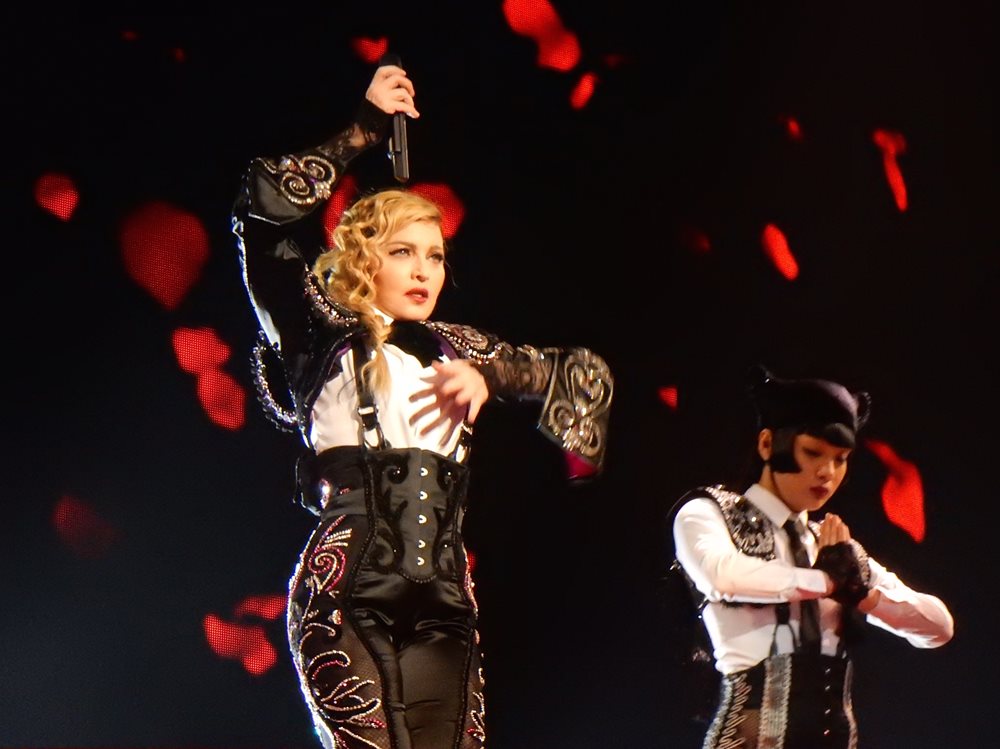 Then, of course, there is the song’s now-legendary spoken section—according to Pettibone, a spontaneous late game addition. “We just wrote down a whole bunch of names of movie stars and that's how the rap came up,” Pettibone told Billboard. The singer's detached recitation, over the beat's bounce, has become one of the early '90s most iconic pop music moments. Like the best breakdowns, this section lets the listener reevaluate the track's fundamental materials.

The TR-909 strides into the spotlight, like a vogueing dancer: all cool detachment and precision posing.

In this case, the TR-909 strides into the spotlight, like a vogueing dancer: all cool detachment and precision posing. Hitting at exactly the 4-minute mark, Madonna’s laundry list of classic celebrities (as well as the song’s striking black and white video) are as legendary as the balls from which the song took its inspiration. As Madonna sings, “Beauty is where you find it.” Truth. The dignified pulse of the Roland TR-909 on “Vogue” is nothing if not beautiful.

Are you feeling creatively inspired by the story of Madonna's "Vogue"? For more swinging TR-909 beats, check out these nine snappy grooves by the sound designers at Carma Studio. All these beats were created using Roland Cloud's TR-909.