The first time I saw Bjork there were fireworks…literally. It was a late summer afternoon when I got a call from a friend with an extra ticket to see the legendary Icelandic artist. I caught a ride to San Francisco from Sacramento in a barely-running Honda Civic. It was unusually cold and wet for the season, and the show was on one of the city’s legendary piers. On moist bleachers, I sat in awe as Bjork—dressed in a luminous white gown—hit a stage littered with what looked like latticed arches of ice, carved and twisting like frozen arms.

Her musicians were an eclectic bunch: a string quartet, two DJs (ladies and gentlemen, Matmos) and a harpist. For the next hour and a half, we sat transfixed. Finally, the climax of “Hyperballad” was mirrored by huge spurting flames and a fireworks explosion: a matrix of glistening flame that fell slowly from the sky and into the surrounding black water. 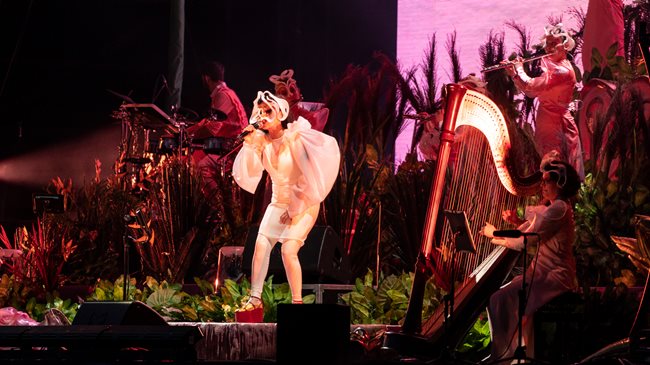 
As the streaming era lowers our attention spans and the slow transmutation of music as commodity keeps us inundated with new information, some traditions have fallen through the cracks. Once upon a time, discovering new music was all word of mouth. Finding records required the discipline and fortitude of a private investigator.

I remember when I’d listen to a new album for six months straight after a release. I’d sit in my room, with complete focus, reading the liner notes, poring over lyrics and orchestration—until the music became a part of me. Still, even to an obsessive like myself, Bjork’s enchanted persona was beyond any other artist I’d encountered. It felt like the Icelandic songwriter was an otherworldly force, and her magic was peerless.

A career first, Bjork’s Homogenic was less an aggregate of idiosyncratic thoughts than a succinct batch of songs. Bjork suggested it was her first record in which all of the material possessed the same coloring as if birthed from the same mother.

The years following her album Post were turbulent, to say the least. The singer moved to London from Iceland to glean more from the city’s bountiful electronic scene, but the resulting displacement made her feel homesick and alienated. A series of publicly scrutinized relationships, a physical altercation with paparazzi, and a horrifying encounter with a stalker left Bjork paranoid and terrified.

It’s no wonder Homogenic is a raw and jagged confessional, and, as such, mirrors the terrain of her birthplace.

Homogenic’s opener, “Hunter,” lives in a dizzying, mystifying sonic landscape. With its push and pull between anxiety and courage, bleating synthetic bass, and serpentine, withering synths, the song at once evokes death and rebirth. The militaristic spiraling of the Roland TR-909, in stereo, weaves a helix of percussive reverie. The listener is immediately drawn into a caustic world of intrigue.
What makes “Hunter” so unique is the juxtaposition of instrumentation: electronics whir beside traditional strings that resonate with smoky alacrity. Occasionally, the vestiges of a staticky accordion or harmonica swirl by, like cracking glass or melting ice. The song’s peak is gentle and unnoticeable as a frog in boiling water. This crawling dirge—like a death march—paints a world where predator and prey are indistinguishable.

Lyrically, “Hunter” is bathed in allegory. Bjork has said that “Hunter” manifests the pressure she felt to deliver music as the monetary provider of her musical “nest” or family. When you are an artist as significant as Bjork an entire financial ecosystem depends on your creativity.

If travel is searching, and home what’s been found, I’m not stopping, I’m going hunting, I’m the hunter, I’ll bring back the goods, But I don’t know when.

The “home” in this lyric can be read as a metaphor for her  success and “going hunting” a representation of the endless need to maintain that success at any cost. Ultimately, “Hunter” is a song about resignation. It is a liturgy for a normal life, and an acceptance of her destiny as an artist—a life devoid of regularity and the coveted reprieve of mundanity that we often take for granted.

Lucky for us, Bjork continues to hunt and slay effectually time and time again. Her records inspire and titillate, and her sacrifice has blossomed into a seminal legacy in the echelons of experimental pop music.