Roland Cloud is pleased to announce the addition of the Roland TB-303 to our suite of software instruments. Utilizing the same ACB (Analog Circuit Behavior) modeling as the Roland JUNO-106, JUPITER-8, and others from our Legendary series, the virtual TB-303 captures the hypnotic tone of the original hardware and forms the perfect complement to the TR-909 and other instruments in Roland Cloud.

Like the Roland TR-808 and its influence on hip-hop, the TB-303 played an essential role in the development of the late ‘80s-early ‘90s rave culture. It is safe to say electronic music as we know it would not exist without this unassuming musical device. The 303 hooked producers with its ability to continually shapeshift and transform grooves in real time.

The Sound that Gave Birth to a Movement

Some instruments are so groundbreaking, they create entire musical genres—the electric guitar and the Hammond organ being shining examples. Roland’s TB-303 is one of these influential instruments, but it wasn’t always seen that way.

When Roland released the TB-303 Bass Line in 1981 it was marketed as a computerized bass machine to simulate a traditional bass guitar. However, as its unique history has shown, inventive electronic musicians soon discovered the 303. They often came across one second-hand; and, these creative musicians found a world of uses for the little silver box and its recognizably fluid low end.

Using the 303 in new ways, DJ Pierre and Phuture pioneered what came to be known as acid. This new style helped form a host of other electronic music genres. The iconic sounds of the 303 remain inseparable from dance music, and they form the foundation of countless historic recordings.

Visit Roland's 303 Day page, to learn more about the iconic TB-303 and the music it inspired!

An Authentic Evolution with Expanded Features

The tidy feel and massive sound of the original are here—from the iconic interface to the six highly playable knobs, it achieves that signature crunch and squelch. The software 303 retains the flow and functionality of the original design while adding a multitude of new features which surely would have turned heads back in the day. 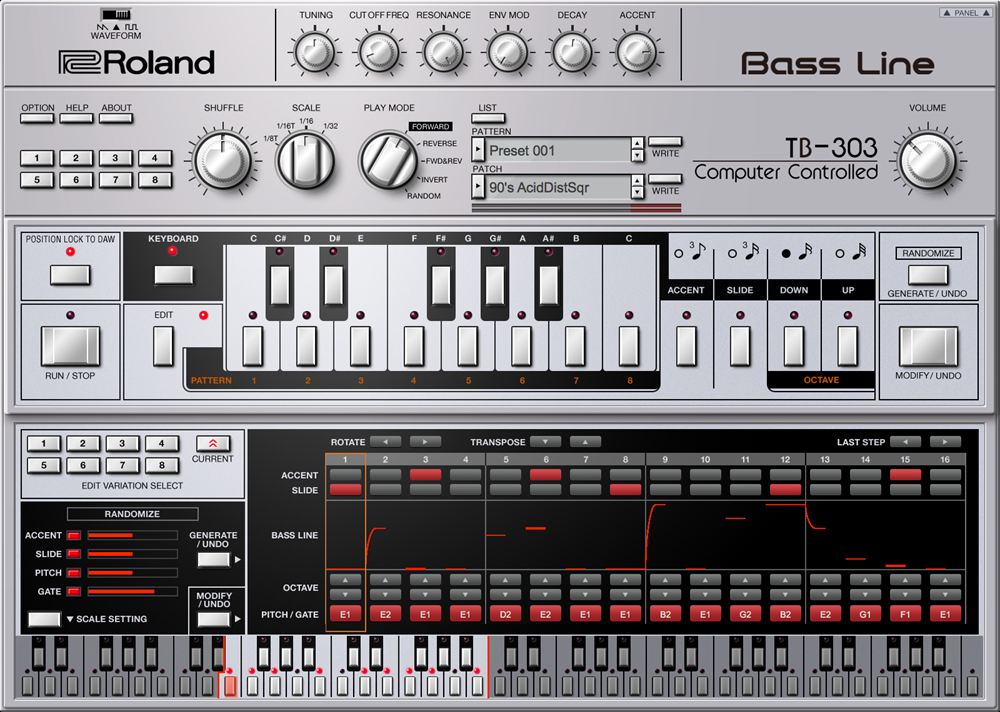 The 303’s new editing window is one of the most striking features. For the first time, you can create and edit patterns with a visual interface. With the ability to see the DNA of a preset pattern, you can edit a variation, or start from scratch then step-edit a new pattern, using up to 6 octaves with user-defined scales, accents, slides, pitch manipulation, and more. The new randomize/generate functions create an endless supply of classic 303 patterns. Exploring the 303 has never been this easy.

With five new play modes (Forward/Reverse/FWD&REV/Invert/Random) Roland Cloud’s TB-303 widens the ability to experiment. These new functions allow sonic alchemists to twist and turn the bass, changing direction at will.

For the first time, the TB-303 can hold up to 64 patterns and 64 patches per bank. The 8 variations of a pattern are still accessible on the faceplate. Plus, with 32 preset patterns and 48 unique sounds, the 303 arrives prepared with sonic templates for you to explore.

A hidden panel on the far-right corner of the 303 unlocks of a variety of new tone-coloring features. Explore the expanded circuit modification via the new VCF trim, Vintage Condition, and Master Tune knobs. The onboard effects, including distortion and delay with tempo-sync, are sure to inspire fresh ideas.

Roland Cloud’s TB-303 provides the means to emulate the past or pave brave new pathways. It is an instrument with a proud history of shaking up the status quo and defying expectations.